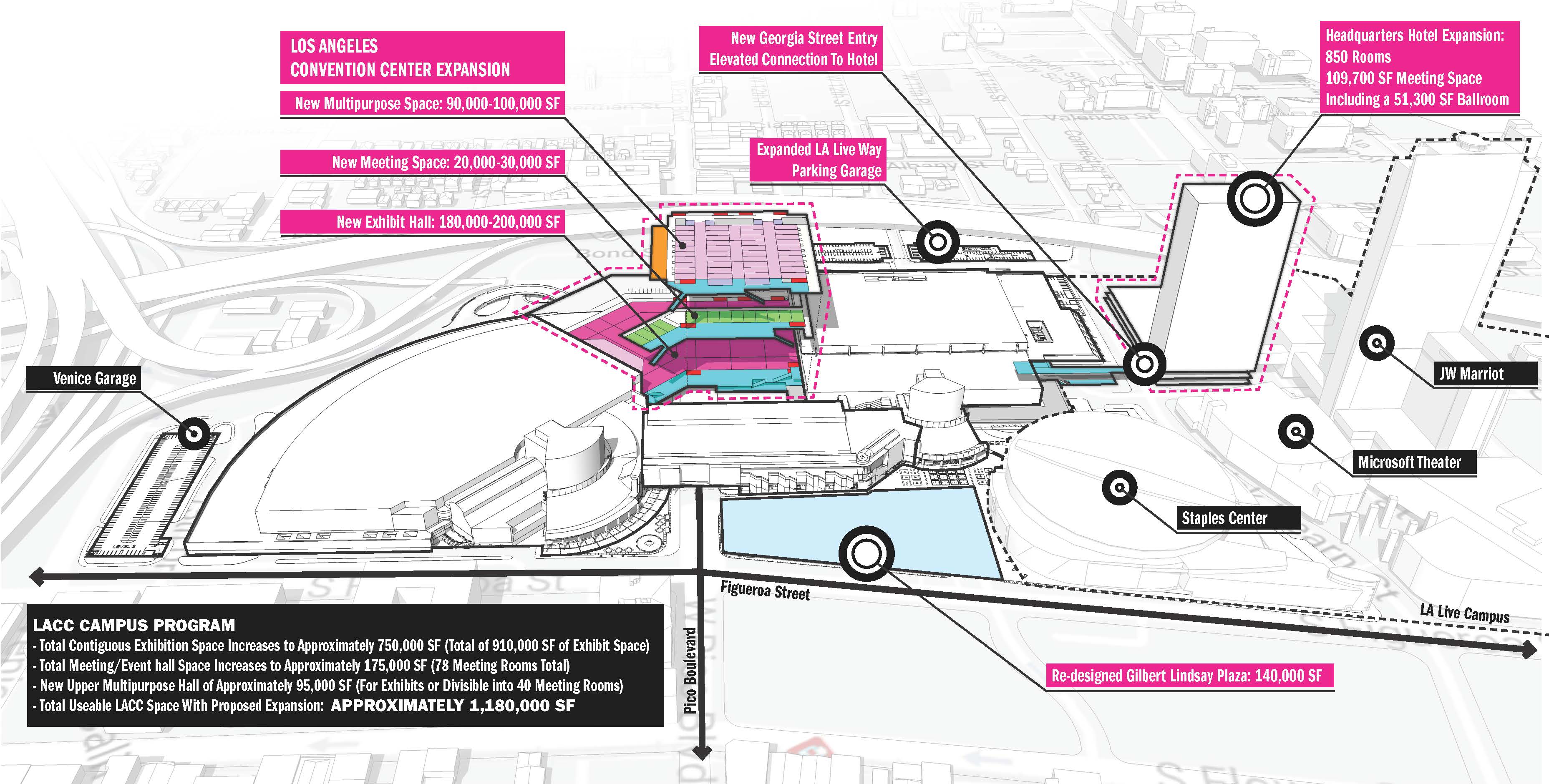 The last time the Los Angeles Convention Center was expanded in 1997, the Lakers were still playing in Inglewood and Richard Riordan had just won a second term as mayor.

Since then, as other cities have upgraded their facilities, plans to enlarge the L.A. center have gone nowhere — to the point tourism officials say Los Angeles loses as much as $1 billion annually in convention business.

Now, the operator of the Los Angeles Convention Center is proposing a $1.2-billion expansion that would involve a public-private partnership and add hundreds of nearby hotel rooms.

The $500-million addition would result in about 800,000 square feet of contiguous exhibition space, a key measure that would make it more competitive with other big convention venues in the country.

The proposal separately calls for a $700-million addition to the JW Marriott Los Angeles L.A. Live hotel on Olympic Boulevard. A 40-story hotel tower with 850 rooms would be built just south of L.A. Live's Regal cinemas complex and would be connected by pedestrian bridges to the existing JW Marriott and the West Hall of the convention center.

Gilbert Lindsay Plaza, currently used as a bus and car drop-off point near the West Hall entrance, would be redeveloped into a landscaped garden and event space that could be used for outdoor exhibitions and receptions. Bus loading would be moved to Pico Boulevard.

The hotel project would add more meeting space, including a 51,000-square-foot ballroom that AEG says would be the largest in Los Angeles.

"This is not just about competing with Anaheim, San Diego and San Francisco," he said. "The bigger opportunity here is to create this unrivaled destination."

AEG told city officials of their plan in broad outlines in recent weeks and hope to immediately begin negotiations to secure construction approvals so the expansion and hotel could be completed as soon as 2021.

Civic leaders have complained for decades that the existing facilities dating from the 1970s are too small to attract major events and poorly laid out with a shortage of contiguous space. Sponsors of large-scale events such as pharmaceutical and medical industry conventions steer clear of Los Angeles because its meeting facilities are inadequate, according to convention officials.

AEG's last convention center expansion plan was contingent on the construction of Farmers Field, a proposed pro football stadium. AEG would have razed the West Hall to make way for the stadium, replaced lost convention space with a new addition over Pico Boulevard and utilized the stadium for exhibition space and meetings.

But that plan fell apart when the stadium never attracted a team and Rams owner Stan Kroenke decided to move his NFL team from St. Louis to a stadium he is building in Inglewood.

"We want it completed by 2022 at the latest," Garcetti said of the latest proposal. "Tourism is one of our huge success stories, but we have been playing with one hand tied behind our back."

Development rights garnered for the proposed football stadium and convention center expansion could accelerate completion of the project. Fikre estimated that the approval process could be completed in a year to 18 months. Construction could then begin and take about two years to complete the convention center addition and 30 months to finish the hotel.

Other elements of the expansion include replacing an aging parking structure on L.A. Live Way adjacent to the 110 Freeway with a larger structure that could house 2,000 vehicles.

"We did a significant environmental review and a lot of other entitlement work" on the earlier proposal, Fikre said, "which could save us a lot of time."

The financing proposal for the $700-million second hotel tower, which would be built on land owned by AEG, follows a model that has been used before for other hotel projects.

AEG and its partners would fund the project but seek financial incentives — probably in the form of breaks on the hotel's bed taxes. To get the JW Marriott and Ritz-Carlton complex built in the mid-2000s, the City Council voted to let AEG keep as much as $270 million in bed taxes generated by the project over nearly three decades. Other hoteliers have received similar benefits.

The funding proposal for the $500-million convention center expansion relies on a public-private partnership model that has been used for other big public developments. AEG's partner, Plenary Group, a Los Angeles infrastructure-development and investment business, specializes in public-private partnerships. It participated in a $1-billion convention project in Melbourne, Australia, funded that way that includes a luxury hotel.

The $500-million cost to design and construct the project would be privately financed by AEG and Plenary through a mix of the companies' funds and privately placed taxable debt sold to large institutional investors, such as insurance companies, mutual funds and pension funds, said Stuart Marks, senior vice president of Plenary.

The city would not have to raise public debt to pay for the development but would make annual payments to the AEG-Plenary partnership after the convention center improvements were completed. The amount of the payments would be based on the final scope of the project agreed to by the city, Marks said.

Helping offset the city's costs would be a share of net operating revenue from the convention center as well as sales of signage rights, food concessions and parking fees.

Garcetti said "if we do this right," the revenue and other city income generated by the facility — such as additional bed tax revenue from increased convention center bookings — would cover the city's annual payments to the AEG-Plenary partnership.

The city is spending about $48 million a year to pay off debt raised to fund the last convention center expansion in the 1990s. The city will make the final payment of $22 million in 2022, the mayor's office said.

The proposal to expand the convention center echoes the motto that the meeting industry has been reciting nationwide: bigger is better.

The Anaheim Convention Center added 200,000 square feet last year to join only a handful of U.S. cities that can boast at least 1 million square feet of exhibit space. That's the equivalent of 17 football fields.

The granddaddy of all convention centers, McCormick Place in Chicago, is the nation's biggest with 2.6 million square feet of exhibition space.

L.A.'s undersized convention center has kept the city from drawing some of the biggest trade shows in the country, such as medical conventions, said Doane Liu, executive director of the Los Angeles Department of Convention and Tourism Development.

"There is pent-up demand from these organization that are literally begging to be in Los Angeles," Liu said.

Even with the expansion, the Los Angeles Convention Center will still not be large enough to hold some of the nation's biggest conventions and trade shows, such as the Consumer Electronics Show, which takes up the entire Las Vegas Convention Center and the meeting spaces at several hotels.