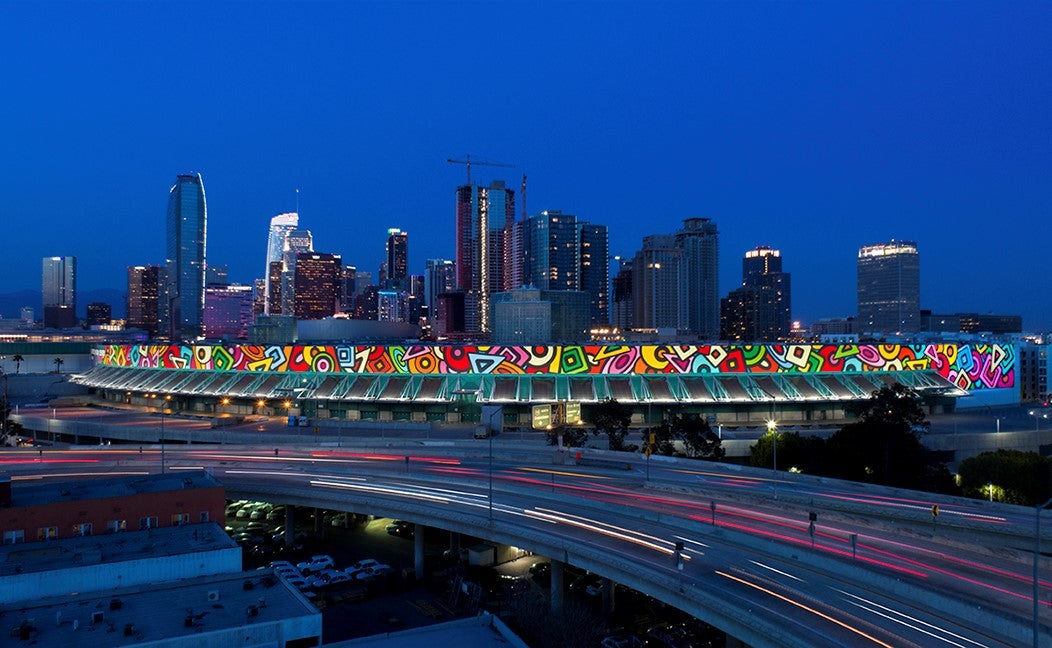 The Four-Football-Field Long Mural and Accompanying Artwork was Hand-Painted by More Than 7,000 Individuals in Los Angeles County

LOS ANGELES (April 30, 2019) - The Los Angeles Convention Center (LACC), owned by the City of Los Angeles and managed by AEG Facilities, recently revealed a massive, hand-painted mural created by Portraits of Hope, titled Shaping LA. The mural, spanning the length of four football fields, and accompanying artwork will be displayed for approximately six months on the LACC’s South Hall facing the 110 freeway and on the ground level of the facility in and around the West Hall parking garage and walkway facing STAPLES Center.

The vibrant project was conceived 13 years ago by Portraits of Hope founders and brothers Ed Massey and Bernie Massey. In 2018, the City of Los Angeles Department of Convention and Tourism Development (CTD) began working closely with Portraits of Hope to showcase an upbeat, identifiable mural to the LACC exterior. Geometric shapes are core design elements of the project, as the young participants are responsible for “shaping” the future.

Shaping LA is the largest public art and civic project in the country thanks to the efforts of thousands of Los Angeles residents through civic education and public policy sessions in over 1,000 schools, creative therapy sessions for hospitalized children and persons with disabilities, social service programs and community operations for the public. Additionally, the project was made possible by partners, including AEG who donated $10,000 toward the project, as well as GES and Freeman who donated labor to install the mural.

“We are proud to support the Shaping LA project because it embodies the AEG values of community service and support of the arts and education,” said Ellen Schwartz, General Manager, LACC. “This project has impacted so many lives and we are excited to be an integral part of this story.”

Portraits of Hope is a national non-profit organization committed to developing dynamic, public art projects that enrich the lives of children and adults. This initiative is a continuation of the program's large-scale, national projects which have brightened and visually transformed public settings and symbols ranging from the NYC taxi fleet, blimps, planes, lakes, and buildings to LA's coastal lifeguard towers, urban laundromats, animal shelters, and frontline fire and rescue vehicles by working with organizations from NASA to NASCAR. Shaping LA is Portraits of Hope's first major project within the city of LA since The Spheres at MacArthur Park in 2015.

After approximately six months, the artwork will be donated primarily to social service institutions to beautify their environments.